American Society of Interior Designers
California San Diego
Find an Industry PartnerManage My Membership
An emotional home reveal: ‘From nothing to everything’

As volunteers from a local interior design group joined the nonprofit Humble Design to help a family emerging from homelessness, one phrase resurfaced again and again.

References and examples of the magic popped up throughout the day when volunteers from the local chapter of the American Society of Interior Designers (ASID) teamed up with Humble Design staff last month on their first project together: furnishing and decorating the near-empty Chula Vista apartment of the Ibarras, a family of five led by a single mom.

“It’s funny how certain pieces just fall into place where they’re supposed to,” said Tanya Snyder, a designer for the San Diego chapter of the national nonprofit Humble Design. “It just keeps happening with every home that we do. Like, we have this unseen force guiding us along the way sometimes.”

“I can’t really talk too much to people about Humble Design and what they do before I start crying because it really is magic,” said Vallerie Dalrymple, the student rep on the San Diego ASID board, who first volunteered for Humble Design through her school, the Design Institute of San Diego.

Her experience transforming a home for a veteran with donated furniture and housewares kicked off the new partnership with ASID, which is expected to include sponsoring another family like the Ibarras and an ASID rep serving on the Humble Design San Diego board.

It’s hard to pin down an exact meaning for “Humble magic,” but it seems to come down to being able to pull off good things, transformational things, after other things go wrong. Sometimes what goes wrong is small, like not having all the parts for a curtain rod and having to MacGyver a fix, as happened in the master bedroom in the Ibarra home.

Other times, it’s the domino fall of things going wrong that leads to homelessness.

That kind of domino fall affected Clara Ibarra and her four kids — Natalia (19), Francisco (18), Nicolas (15), and Adrian (11) — before Humble Design arrived at their doorstep with a U-Haul truck full of everything from sofas to string lights to spoons, to pull off their 131st “Deco Day” in San Diego County.

The close-knit family left the three-bedroom apartment where they’d been living for two months with only beds, a few chairs, and a small cupboard of plates, cups, and essentials. They came back five hours later to a fully decorated home. 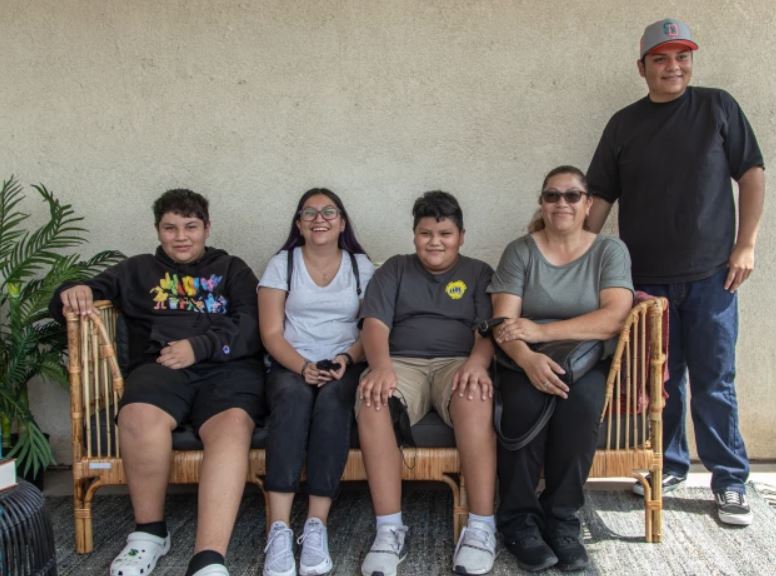 “It’s amazing to see our apartment go from nothing to everything you guys did now,” said Clara Ibarra in an interview after most of the team of 19 from Humble Design and ASID left after the big reveal.

“It was overwhelming in a way, but in a way, it made me feel like ‘Wow, people actually are out there to help people,’ ” she said.

Ibarra, a single mom who left an abusive marriage in 2014, lost her two jobs and her housing in 2017 after a disabling injury. The family was able to rent an apartment for a year in 2018 when she was receiving short-term disability payments, but then they were back to sleeping in hotels or their car until East County Transitional Living Center gave them a room. Alpha Project helped the family find the apartment.

“It’s crazy,” said Natalia. “You know, we went through a whole roller coaster from having nothing to suddenly having a furnished place. I’m really, really grateful that we’re now here.”

Added Ibarra, “As far as the Humble magic: Yes. Everything you guys did, it’s just magic.”

That magic is at the heart of the mission of Humble Design, a national nonprofit founded in 2009 in Detroit with chapters in Cleveland, Chicago, Seattle, and San Diego. Its mission is to not only furnish a home, a largely unmet need in the magnitude of homelessness, but to restore dignity through design.

According to Humble Design data for all of its chapters, up to 50 percent of families typically return to homelessness a year after securing housing. For clients of Humble Design, however, the figure is 1 percent.

Treger (who grew up in El Cajon) and her husband, Rob Strasberg (the nonprofit’s CEO), started Humble Design when they lived in Detroit; the couple now lives in La Jolla.

“I was new to Detroit, and my friend confided in me that she and her two kids were homeless,” Treger recounted. “Their old landlord had put everything they owned on the curb when she couldn’t make the rent.” After helping her friend find a new place to live, Treger asked her community for donations to furnish and decorate that home.

When people kept dropping off donations, Humble Design was born. She and a friend came up with the name after writing ideas on a whiteboard, according to Laura Lavoie, Humble Design San Diego’s director. They quickly landed on “Design” for the noun.

“And then they whiteboarded all of the emotions that they felt while providing the service,” Lavoie said. “They started with happy and joyful and hopeful, and landed on humble, feeling like, at the end of the day, they felt mostly humbled to be able to provide this service for somebody who really needed it.”

Nationally, the group expects to have furnished its 2,000th home by the 27th of this month.

The pandemic both complicated Humble Design’s ability to furnish homes for the homeless and intensified the need for their services.

During quarantine, when in-person Deco Days weren’t possible, they provided more than 20 “Home Kits,” furniture, and housewares their designers picked and boxed for clients and case managers to pick up from their warehouse Lavoie explained.

Now, they meet clients like Ibarra by Zoom and tour the spaces online. Clients hold their phones as they walk through the rooms that the team will furnish with donated items from their 8,800-square-foot warehouse in Logan Heights.

The Ibarras asked for couches since they hadn’t had one since 2017, and neutral and natural colors.

“As soon as we end the call, we just start working in big furniture first, you know, typically beds, couches, all that big stuff,” said Snyder, who herself spent six months couch surfing and hotel hopping after a fire burned down her apartment. “And then the second day, third day, we’re basically planning all the little details. And it’s always the little details that really pop out. Because we’re going on intuition.”

Each day, more and more San Diegans need help from groups like Humble Design. The number of people entering homelessness for the first time in San Diego County nearly doubled from 2,326 in 2019 to 4,152 in 2020, according to a report from the Regional Task Force on the Homeless released in April.

To meet the growing need, Humble Design San Diego has started to double the number of homes they furnish each week. “In August, we have forecast three weeks of double-Decos and aim to be consistently at two homes each week beginning right after Labor Day. This is contingent on successfully staffing up in order to provide our clients with the same level of service,” said Lavoie.

Partnerships like their new one with ASID San Diego are critical to that goal. Many local companies provide money and volunteers, including this summer’s partners, Frank Subaru, CMR Risk & Insurance Services and the Frank Motors extended family, and ongoing supporters including La Jolla Cosmetic Surgery Centre, the 5 Together Foundation, Subaru’s Share the Love campaign, UBS and the Installed Building Projects Foundation.

Several furniture and staging companies donate furniture, housewares, decor, and supplies, including Article.com, Sonder, Everything Creative Designs, Behr Paint, and Casper. Individuals, too, donate every week to the warehouse.

The ASID partnership came about after Dalrymple volunteered, which inspired chapter president Suzi OBrien and others to volunteer at the warehouse as well.

“I was a social worker for 25 years,” said OBrien. “We really want to do philanthropy; it needs to be the centerpiece of what we’re doing this year.

“This is a natural fit,” she said. “One of the things I heard when I started listening to our designers, students, and industry partners was that they talked about wanting more connection, not just cocktail parties… my feeling is always if you get designers together for a project, that’s how you make connections.”

Shannon Miller-Rice, who takes over as chapter president in October, said, “We’re definitely going to sponsor another home in 2022. Additionally, Humble Design (San Diego) has asked ASID to join their board. That position would be a two-year position, likely a past board president, someone who has a passion for Humble Design.

“ASID has a lot to learn about the mission Humble Design has going forward for San Diego. And how we as an industry can support that — that includes introducing our clients to Humble Design. It’s a win-win.”

One advantage of the ASID partnership for Humble Design is that most ASID volunteers are professional designers, instantly ready work on homes like the Ibarras’ apartment.

Amber Courtney (a designer who’s been with Humble Design San Diego since its beginning) expressed that confidence to the ASID volunteers at the morning huddle in front of the apartment. “We all want you to be designers today to use your skills. I mean, we packed stuff. But we don’t want to be stepping on your toes or controlling what you guys can do to make your magic happen.”

There’s a phrase Courtney kept repeating during the big reveal as she showed the Ibarras around their newly decorated home, which is now full of positive sayings like “Gather,” “Dream big,” and “Days spent together become memories to treasure.”

As she prepared to leave the family to enjoy their new home, their launchpad to dream, she said it one more time: